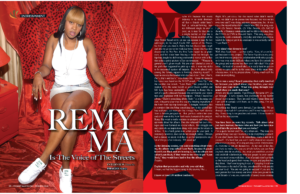 Remy Ma has has a long and storied career in hip-hop. She made a hit the massive Lean Back released an album, got incarcerated due to a violent indecent with a relative and returned to grace TV screens with Love and Hip-Hop. She would again team up with Fat Joe of Terror Squad fame and make another monster hit All The Way Up. Her husband Papoose was featured in the first issue of Hustlenomics, and their love story is one of lore in hip-hop for the faithful and unwavering support he lent her during her incarceration and their struggles to have a baby. Remy Ma is currently pregnant and she made the announcement recently at a vow renewal ceremony between her and her husband and gave more details in an Instagram post

We initially interviewed Remy Ma for our Women’s magazine.